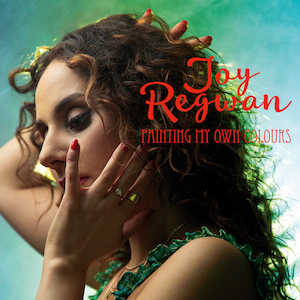 Album is a fine set of timeless modern folkpop-pieces, produced by Daniel Okas and Sami Tamminen.
folkpop-teoksia. The album was record on January and singles “Thank you” and “Invisible Tears” have been released before.

“Painting My Own Colours as a title describes well the album as well as my career so far. I have my own voice and way to do things, and it is leading just where it needs to go”, says Regwan. “Its wonderful to release this album – its the closing of a circle and a beginning of a new era at the same time. I hope, that the record rolls into many hearts, and gives atmospheric monents and comfort.”

Albums third single is lullaby like “Baby Bloom”. “The song was born in a mystic morning mood: I woke up humming the melody and went to the piano to find the chords. I knew right away, that this was going to become a song for the album. While i was working on the melody I saw pictures of hills, foggy fields and naked trees of Irland. Also the lyrics came just in a moment! I would describe the song as a kooky lullaby”, Regwan describes.

Dark toned Joy Regwan sings even about death serious topics with a twinkle in the eye. Her debut album “Mistä taivas alkaa” was released through Stupido Records just before the pandemic in March 13th 2020.