AD was once a jazz-steamed post punk band that made three albums in the 80s. In the early 2000s, AD made two albums that took electronic music to many special directions.

Now in 2020 AD is there again and its mission is to combine electronic music as well as blues and once again do something completely unique.

The new album “ElecTrouBlues” is a special journey to anywhere. Acción Directa Ismo Laakso sets the pace and vocalists Elli Maple and Iiro Ollila interpret a story in English and Finnish that is not always beautiful, but unfortunately true a.k.a real Blues. In 2020, AD is in its initial state in the sense that the band still doesn’t fit in any compartment. “ElecTrouBlues” may specify something, but not everything.

In addition to five own songs, AD interprets Billie Boy Arnold and Siouxsie. One was originally blues and the other electro. In the handling of AD, they are ElecTrouBlues like their own songs.

Listen to AD and Ismo Laakso on
Spotify 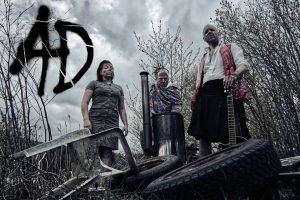