Teini-Pää is a Helsinki-based band that has released the sold-out cassette ep “Full of New”. The band has also released a 7 inch single Hotel / 112, where the ABBA cover will be promoted to a summer hit candidate in Rumba Magazine.

Currently, the band is in the studio working with Lauri Eloranta on a full-length album to be released in the autumn.
The title of the upcoming album “The World Is Waiting” reflects the whole hopeful atmosphere, accompanied by crack guitars and beech pop fillings.

The album’s first single, already heard on gigs (when there was those), Downtown will be released later in the spring. 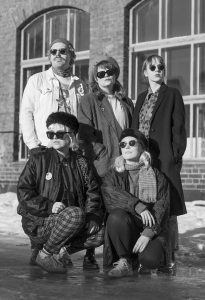