The Shrieks is an insanely fine Helsinki punk’n’roll band that makes the hems flutter and the mohawks sway. The orchestra, known for its crackling stage presence, has ravaged the audience with its gigs both in Finland and abroad. In Germany in particular, the band has a passionate fan base.

The Shrieks unique sound combines irresistible melodies with a fierce punk bass
as well as three-tone vocal harmonies. The band’s production includes echoes from garage, rockabilly and surf. Bassist Hellka and drummer Melvis Hessley are responsible for the composition of the songs, and the lyrics are mainly written by the vocalist Tipsy Mayhem. 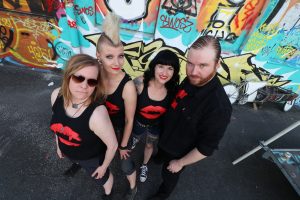